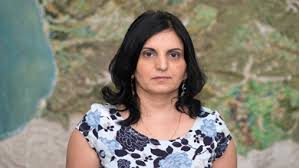 Nato Jorjiashvili was Born on October 14, 1977 in Tbilisi. She graduated 65th school in 1993 and entered to the Tbilisi State University Faculty of Applied Mathematics and Computer Science, which she graduated with honors in 1998 and was awarded a bachelor’s degree in Applied Mathematics. In the same year he entered the same Faculty Master stage, which she also graduated with honors in 2000 and obtained the Master’s degree of Applied Mathematics. Along the same university in 1999 and began to work on the theory of random processes as an Assistant. In 2004 she defended her PhD thesis in the field of mathematical cybernetics. Since 2004, working initially at the Seismology at Institute of Geophysics, and the Seismic Monitoring Center. At the same time, in 2005, went to Japan for the Master course in seismology and earthquake engineering at Building Research Institute, and in 2006 was awarded by master’s degree of disaster mitigation. She is actively involved in scientific research in seismology both domestically and in international projects. International underwent training in France and Japan. Also has participated in many international conferences and forums. Since 2008 she has been working at Ilia State University as an Assistant Professor. She is an author of 22 scientific publications in highly-rated international journals. She is not married. She has a mother and a brother. She loves theater and music.

Non-extensive statistical analysis of seismicity in the area of Javakheti, Georgia 2011 Computers and Geosciences